Maybe it's because of Thanksgiving or something -- the grocery store had some huge orange tulips.  Tulips in November???  These kept beckoning me, so I finally decided to go for it even though I heard tulips are very difficult to paint because they move around with just the slightest change in sunlight.  Guess what, they do move around - almost like they're two legged!  I figured if I work really fast and get it captured in an hour I'd be fine, but nooooo. . . .    So here's my attempt starting from painting live to stopping to take a few emergency reference photos to keep it together.  What a challenge.  Including a reference photo to show how far apart the tulips ventured in a very short time, like 20 minutes!  It was fun watching them dance all week.  Get a bunch, put them in a well lit room and enjoy the show!

LOL. . .  these were so beautiful, orange with yellow edges, but quite dramatic when put on stage.  One was literally head down limp so I cut it off and put it into a small vase - within minutes it was poker-straight as they say and then two hours later it was making a left turn to the window.  such characters!  Who knew?

Happy Thanksgiving - it is special to celebrate this uniquely American holiday.  We are so very lucky.
Posted by Johnna Schelling at 8:52 AM 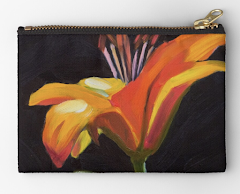